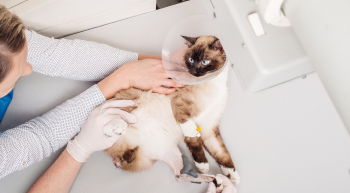 Spaying Your Female Pet
An ovario-hysterectomy, also known as spaying, is the surgical removal of the ovaries and uterus.

Remove the risk of a pyometra. A pyometra is a uterus infection of an intact female, most commonly seen in dogs, but can be present in any female with an intact uterus. For most cases, the only way to treat this condition is to remove the ovaries and uterus.

Neutering Your Male Pet
Neutering, or castrating, a male is the surgical removal of the testicles.

Reduce male behavior. Neutering can reduce or eliminate unwanted behavioral characteristics such as urine marking, territorial aggression and roaming.
Remove the risk of cancer. The neuter operation essentially removes the possibility of testicular cancer and reduces the risk of prostatic enlargement or prostate cancer.

Most pets will have at least one surgical procedure done in their lifetime, usually spaying or neutering. Sometimes, other procedures are warranted.

A non-emergency situation generally means the animal’s life is not at risk, but their present situation requires medical attention. Non-emergency surgeries can also be cosmetic or preventative, which will help ensure your pet a comfortable and healthier life.

It is important to seek out veterinary attention for your pet BEFORE their condition worsens.

Below is a list of some common non-emergency surgical procedures that are performed at both Ferndale and Fortuna Veterinary.

Came for an emergency service. Very impressed with staff's kindness, professionalism, and post-surgery follow-up. Also their systems are more digitally modern than I expected including email and text appointment reminders

My dog usually has trouble with vets but Dr Flores was so amazing with him! Definitely one of the sweetest vets I've ever been to. All of the staff was super great and helpful as well! We will definitely be coming back.

Caring, compassionate, folks who have a good rapport and a good way with animals. They know their stuff on veterinary medicine and take the time to explain things in both technical and nontechnical language; whichever is needed to make sure you understand exactly what's going on. Grateful for the doctor and supporting staff here. Highly recommend if you are in need of a vet.

Friendly, competent staff! They squeezed me in for a quick appointment before a busy weekend. They even called the next day to check my cat's progress.

I have been bringing my cats and dogs to Fortuna Vet Clinic for decades. They are always friendly and never seem rushed. Very important: whenever my animals were sick or injured, I was able to bring them in within the shortest time. The vets or personnel always called my house to check on my pet when they were really sick or hurt. This has been my experience and I appreciate this so much. They also acknowledge your loss, when your pet dies. I have no complaints.

The ENTIRE staff at either location are amazing! I have been taking all my fur babies for years and they have never ever done us wrong! My one dog would not let any vet near him...he loved Chris and his wife! I would recommend anyone who needs a vet to go to them and I will never use another vet again! Thank you a million times over to this amazing crew!

All of the vets are knowledgeable and friendly. I especially like that they do both large and small animals. We breed horses and have dogs. It is nice to have one vet that does it all.

Milo says it's a great place to pack up and make a visit... Four Paws Up to be sure!

"We've been looking for vet care in this area for years that we felt actually cared about our animals and we've definitely found it here. Dr. Kris and his entire team are awesome!"